Aim: To study the mechanistic underpinnings of the interplay between microcirculation and plasticity

In addition to clinical imaging and outcome analyses in patients, we aim to understand the interactions between recanalization, collateralization, cerebrovascular reserve, microcirculation and neuroplasticity after stroke.

To address this, normal and spontaneously hypertensive rats (SHR, the latter are expected to have less collaterals and cerebrovascular reserve) will undergo thrombin occlusion of the middle cerebral artery followed by reperfusion producing different degrees of microcirculatory impairment (Calcinaghi et al., 2013). This stroke model is unique as it does not artificially impact collateral supply and allows for intravenous thrombolysis, very similar to the clinical situation (El Amki et al., 2012). By using different rat strains and varying times until thrombolysis, we aim to pinpoint the impact of pre-existing collateral network, cerebrovascular reserve and timing/degree of reperfusion with outcome. Laser-Speckle imaging (LSI) will be used to visualize changes in cortical perfusion online, during and at different time points after stroke and thrombolysis attempts. These will be combined with inhalation of CO2 containing anesthetic gas to map CVR in analogy to imaging in stroke patients. Furthermore, we will apply MRI perfusion assessment using arterial spin labeling (ASL) approaches, which has the advantage that no application of external contrast agent is required (Bracko et al., 2014; Wegener et al., 2007). To characterize the relationship between perfusion, plasticity and functional recovery, we will investigate long-term potentiation (LTP) of cortico-cortical connections, a marker of cortical plasticity, using slice electrophysiology in our animal model, and relate these data to those collected in patients (aim 1). SHR are unique to model stroke, as they incorporate spontaneous hypertension and chronic hypertensive brain lesions as some of the most common comorbidities in human disease (Sommer, 2017).

As an intervention to enhance plasticity and to model the clinical situation, we will perform task-oriented motor rehabilitation by pellet reaching in a subset of animals. This method, extensively studied and refined in our stroke research laboratory (Buitrago et al., 2004), has been applied to large cortical-subcortical stroke recently (El Amki et al., 2017). We will assess the impact of rehabilitation on microvascular perfusion and the collateral network after stroke in the previously healthy rats versus the SHR strain. We expect that indeed, there is an amplification of the vascular network with increased plasticity, which will be studied using slice electrophysiology as well. In a subset of animals, we will study the morphology of the microcirculation by direct visualization of the brains microvascular network. The CRYSTAL (Clarification by RapidlY Substituting Tissue with Acrylamide devoid of Lipids) technology developed in the Aguzzi laboratory transforms biological tissue into a hydrogel mesh which is followed by the extraction of lipids resolving every capillary and endothelial cell. We will use this technology in the proposed animal model by labeling the vasculature with fluorescent dextran and compare the microcirculation of SHT and control rats not or undergoing rehabilitation. Furthermore, multimodal imaging including animal MRI with/without assessment of CVR and laser speckle imaging of cortical perfusion will provide complementary information to human data leading to a better understanding of the interrelation of microcirculation, perfusion and collateral supply. 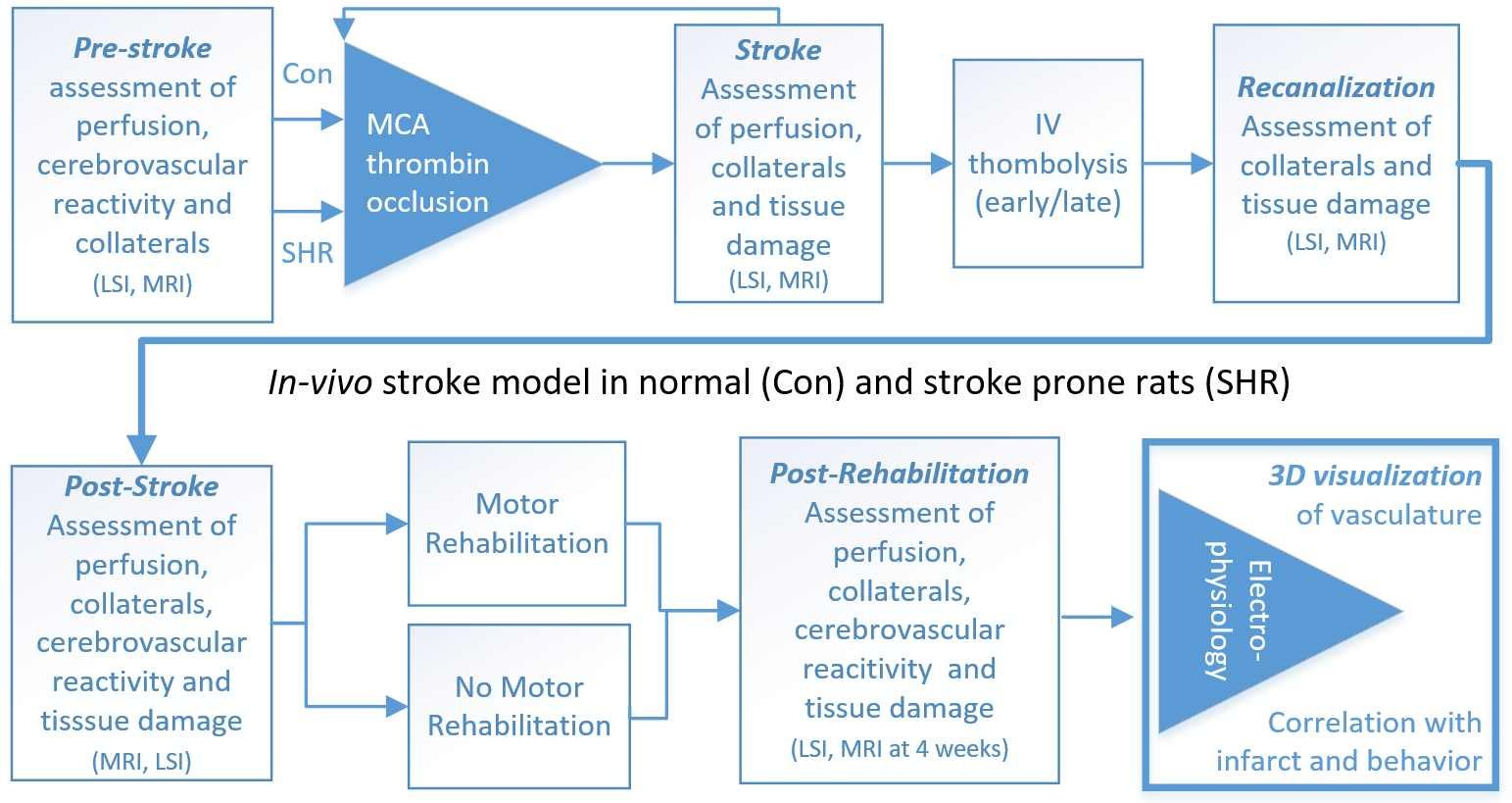